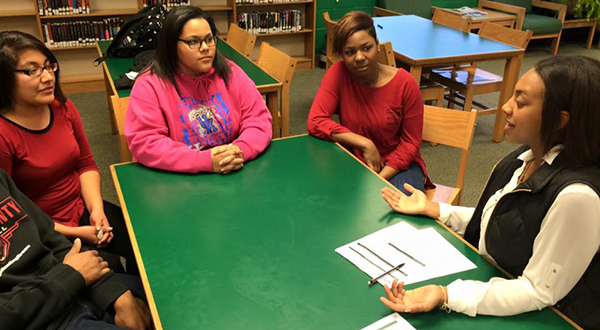 The General Assembly will commit an additional $14 million over the next two years to help students afford college after a sustained push by the Prichard Committee Student Voice Team to boost funding for need-based college grants and scholarships.

The Student Voice Team labeled its campaign the “Powerball Promise,” urging state lawmakers to make good on the pledge not to divert lottery proceeds from education. Instead, the students urged that the gaming profits should fully fund the state’s College Access Program for low-income students and public colleges and the Kentucky Tuition Grant program for low-income students at private schools.
The campaign came as student leaders drew attention to the challenges of rising tuition and increased efforts encouraging high school graduates to pursue college degrees. As part of an 11th-hour budget compromise, lawmakers backed the student push, which included testifying before lawmakers, writing newspaper op-eds, organizing a Capitol rally, and encouraging students across the state to contact lawmakers directly.
The funding originally would have provided an additional $55 million to help Kentucky college students over the next two years but a last-minute veto by Gov. Matt Bevin effectively reduced the amount to $14 million. The final amount is expected to help 8,000 students over the biennium.
Sahar Zadeh, a sophomore at Dunbar High School in Lexington and communications director for the Student Voice Team, said that the budget decision will greatly help many students struggling to afford college across the state. She added that increased funding was only one part of the Student Voice Team’s campaign to improve transitions from high school to college, following up on a report by the group last summer.
“We would like to see a greater emphasis on college affordability by administrators, counselors, parents and students themselves,” Zadeh said. She noted that in interviews and roundtable sessions with students, many told the Student Voice Team they are eager to attend college and work to prepare for that goal, but that information about how to pay for higher education is often in short supply and comes too late in the process.
The Student Voice Team held an information-night roundtable in Washington County in March to hear from students and parents about affording college. She said the session echoed the team’s findings that awareness of federal and state financial aid is minimal.
To bridge the gap, the Student Voice Team has partnered with the Gear Up Kentucky program to create radio and television public service announcements about options for affording college.  Their public service announcements will be broadcast by TV and radio stations over the coming months.

STILL A GROWING PRESENCE
The Student Voice Team now includes over 100 volunteer members in middle schools, high schools and colleges, representing more than 30 Kentucky counties. Among the group’s other activities in 2016:

*The team presented information to the State Board of Education in February about how principals and superintendents view the role students can play in school decision-making. The group fought unsuccessfully in 2015 for lawmakers to allow student representatives to serve on local superintendent screening committees that consider applications when school boards hire superintendents. The Student Voice Team sees opportunities for students to also gain a greater voice on school councils and other local panels.
Eliza Jane Schaeffer, a senior at Henry Clay High School in Lexington, said schools should take full advantage of students’ insights on school improvement. “Schools can actually increase student achievement by supporting students to serve as partners in decision-making,” she said. Even without formal representation, forums and surveys are a good tool for school leaders to hear from students, said Schaeffer, who chairs the Student Voice Team’s School Governance Committee and played a major role in their legislative outreach.The Team plans to release a policy report on the role of students in school governance at the end of May.

“The Student Voice Team continues to evolve and produce at a rapid pace,” said Rachel Belin, its senior director. “I attribute that to the fact that it is nourished by the Prichard Committee and continues to draw a dynamic array of young people and older allies who understand on a visceral level that students can and must be partners in the work to improve our schools.”